The White Shark Conservation Trust has been established to promote awareness of the need to conserve and protect the white shark, Carcharodon carcharias and to educate the public about the animal. This action was triggered by a personal desire of one of the Trustees who decided he could no longer remain an armchair environmentalist.

The realisation of the absolute fragility of these creatures was brought home to Bruce Goorney on a life changing expedition to see the sharks first hand at the Neptune Islands in the Spencer Gulf, South Australia in January 2008. Bruce had already realised the media representation of the white shark was wholly inaccurate, but it was not until he actually met the animals whilst cage diving, that he realised how intelligent, timid, cautious and truly beautiful they are As he recalled on exiting the cage after his first dive, it was the most humbling experience of my life.

After much thought over the rest of 2008, Bruce decided he had to do something proactive to help change the public perception and gain support to help in the conservation effort. Encouraged and aided by Katrina Amiria, in 2009, Bruce and Katrina launched the White Shark Conservation Trust. 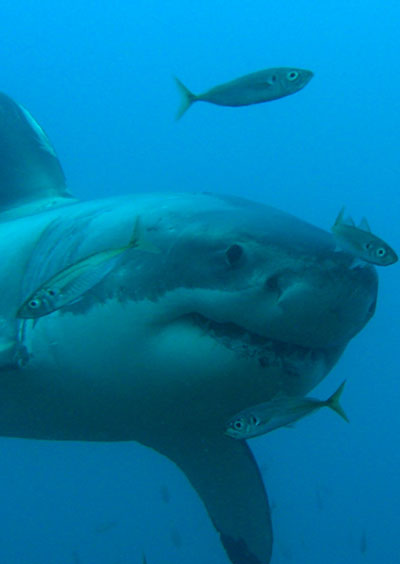 I work for the Department of Conservation’s (DOC) Marine Species Team, based in the Tāmaki Makaurau/Auckland Office. I initially joined DOC in 1989 on a 13-month contract to undertake a dive survey of the Marlborough Sounds. My work for DOC has focussed on marine protected areas, coastal resource management and species conservation, particularly marine fishes. Together with Malcolm Francis, NIWA, I was co-leader of research on New Zealand’s great white sharks (featured in ‘New Zealand’s Great White Sharks by Alison Balance) between 2005 and 2015. I currently lead the Marine Species Team’s work on protected marine fishes and turtles. This includes projects on great white sharks, basking sharks, oceanic manta rays and threat assessment of all of New Zealand’s sharks and rays. I am a member of the IUCN Shark Specialist Group (Australia & Oceania), a director of the Tindale Marine Research Charitable Trust, a committee member of the Marine Conservation Action Fund (NEAQ) and a marine research associate of Auckland Museum. My museum-based research includes taxonomic studies of spiny dogfishes, whaler sharks and smoothhounds. I have authored or co-authored over 100 scientific publications and reports.

I am a keen recreational fisher and have dived around much of New Zealand’s coastline, including the Kermadec and Three Kings Islands (two of my favourite places to dive anywhere in the world).

Scott stems from several generations of seafarers with his grandparents avid big game fishers in the early 1940’s.

Scott has been the managing directors of multiple companies & organisations for over 30 years with a background in estimating/ costing, contracts, sales, designing, building, manufacturing & stock control. Most of his spare time has been dedicated to the great outdoors.

After spending a lifetime growing up around the sea, both above & below the water, developing their angling skills & learning first-hand about the marine environment it became easier to contribute valuable data & knowledge to scientists, fellow anglers & fisheries managers on marine issues. His intimate knowledge of the New Zealand coastal waters has proven invaluable at time to the white shark research work conducted by Department of Conservation and NIWA over the years.

Scott is an internationally renowned angler, and has been ranked in the IGFA world top ten numerous times. Almost half his catches were released live & most of the balance donated to science. This has greatly influenced anglers worldwide in sustainable sport fishing practices. In June 2012 Scott, already a life member, was appointed as a member of the International Committee of representatives for the INTERNATIONAL GAME FISH ASSOCIATION (IGFA) promoting ethical angling through science & education worldwide. In 2014 Scott reached the pinnacle of his fishing career by receiving the most prestigious international angling awards, the International Game Fish Associations Lifetime Achievement Awards.

Scott is a master scuba diver & has achieved many diving qualifications over the last 40 years. Logging up thousands of dives both here in New Zealand & overseas. This has given him a thorough insight into the underwater marine ecosystem.

Scott has been involved in charity work since 1990 & is currently a volunteer cataloguing marine collections at the Auckland Museum fish lab.

Bruce’s passion for the ocean and marine life was triggered by regular visits to the Caribbean and Bahamas as a child as he had extended family there. Much of his time while out there was spent in and around the ocean with friends and relatives who lived there. The subject of sharks was a common one! At the same time, Jacques Cousteau’s series ‘Ocean World’ series was being aired on TV and Bruce was hooked (he did his first scuba dive at around the age of 10). In 1992 Bruce completed a diploma in Fish Farming and Fishery Management, further fuelled by his fascination with fish and marine life, however, he did not see a future for himself in the industry, and by 2001 was a graduate engineer starting a new career in the aviation industry where he remains employed today. The passion for sharks and marine life never left Bruce and after moving to New Zealand in 2005, he set about ticking ‘seeing a White Shark’, off his bucket list. The White Shark Conservation Trust is the brain child of Bruce Goorney spurred by a lifelong interest in sharks and triggered by a white shark cage diving expedition in 2008 in South Australia. (The White Shark Conservation Trust was created in 2009 and became a registered Charitable Trust in 2010).

While researching setting up the White Shark Conservation Trust, Bruce meet Clinton Duffy for the first time and a strong friendship was established fairly quickly. Clinton was actively working with Dr Malcolm Francis (NIWA) on White Shark Research and Bruce was invited along on numerous tagging and research trips with Clinton around New Zealand. On one such trip to Stewart Island, Bruce met and worked with Scott Tindale, and a bond and friendship was established with Scott. Scott’s wealth of knowledge about the Kaipara Harbour resulted in Bruce, Scott and Clinton doing a number of tagging trips out on the Kaipara resulting in a large number of tags being deployed.

In 2019, Bruce invited Clinton and Scott to join him as Trustee’s to the White Shark Conservation Trust.

Fundraising to donate to White Shark Research and Conservation projects for the purpose of purchasing shark tags and/or contributing towards the New Zealand research and conservation efforts for the great white shark.

Aid in the protection and preservation of the white shark in New Zealand waters.

Provide an avenue for people concerned with white shark survival to meet and interact.

Provide inspiration, guidance and tools to enable New Zealanders to protect and support the conservation efforts dedicated to white sharks.

Assist and co-operate with persons and organizations sharing similar aims.

Currently the trust is actively pursuing public and private donations for assisting New Zealand research in 2018. The Trust is also involved in organising seminars and presentations on related subjects and fundraising activities.